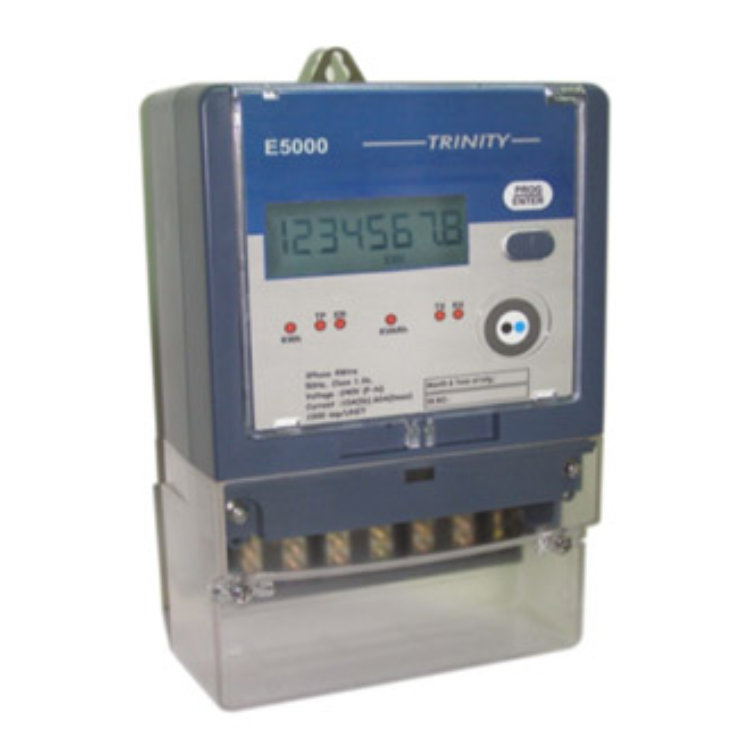 E5000 is a polyphase whole current (30A or 60 A) digital KWh meter, with three relays capable of cutting the power connection to the load.

The idea behind pre-paid delivery of electricity is to shift the onus of paying the money for electricity in time from the provider to the user. In fact, in such a scheme, since the money for electrical energy used is collected in advance, there is going to be a positive cash flow for the electrical power provider. Also, the costs associated with the generation of the bills, delivery of the bills, and disconnection of the power supply in case the bills aren't paid on time is eliminated.

In a well implemented pre-paid scheme, the following points have to be addressed

1) Collection of Revenue : This is done on the vending station(s). If there is more than one station in case of a large geographical area, then all the individual stations are connected to a central database server which holds all the records.

3) Decrementing the loaded revenue : The amount of money loaded into the meter translates into a fixed amount of electrical energy, depending the prevailing rate for each unit of electricity. Based on this, as soon as energy consumption is recorded in the meter, the meter decrements the money loaded in a real time fashion. As the rate can change anytime, the vending software also loads the new rate for deduction to all the meters in the smart cards, as and when needed.

5) Disconnection : In spite of reminding the user, if he does not reload the credit into the meter, at some point, the revenue stored in the meter will reach zero. At this point, the electrical power to the user has to be disconnected. Inside the E5000, there are three 60A relays, which are in series with the load wiring. Normally, these relays are closed, but when credit reaches zero, the meter opens these contacts, thereby cutting supply to the user. This action is automatic. The relays are also of latching type, and hence even if power to the meter fails and comes back, the relay status remains open.

6) Security of transactions : The transactions are secured by means of
a. Secure Encrypted Memory Smart Cards.
b. Record of every transaction in the database along with the identity of the person having done the transaction.
c. Physical printout records generated for the user for his records.

7) Unloading of revenue credit : It may sometimes be necessary for the loaded credit to be unloaded and the same amount be returned to the user, e.g. If the tenant wants to vacate and move away. In this case, the vending software has the facility to unload the credit and printout a payment voucher in the name of the user.